From a local event to a global platform that annually presents all the latest and cutting-edge trends in
e-learning technology.

In 2011, Stanford launched Coursera and this led us to think that online education has a big future.

Nurlan Kiyasov, Commercial Director at NUST MISIS teams with partners from other universities to persistently promote the idea of establishing a Russian educational platform that will host online courses in the basic disciplines studied at Russian universities. Back then, none saw the problem and the need for such a platform since universities have been teaching for ages and will continue to do so. This is how EdCrunch was founded in 2014 — to vividly demonstrate to the government officials how much we are falling behind from other countries that are already on the way to introducing new technologies into the educational sector.

EdCrunch conferences — to vividly demonstrate how much we are falling behind.

IT WAS A GREAT CHALLENGE

As it was our first attempt to organize a huge event, many things were new to us: how to arrange visa support for speakers, how to rent equipment during a peak season of events and how to bring all the participants together. That first time the budget was scarce and we had to make choices all the way through: make ads, print banners, get fancy furniture or bring one more speaker. Eventually, we arranged a huge meeting with all the management, invited speakers, including the Deputy Prime Minister of the Government of the Russian Federation. Daphne Koller from Coursera, founders of Iversit, OpenLearning and Australia joined the meeting online.

At the meeting, Daphne mentioned 10% of Coursera students were from Russia. That was a mind-blowing number for all those present. The ministers got jealous, startup CEOs envied, and Nurlan simply heaved a sigh of relief. Something was definite — it was time to start promoting e-learning in Russia. That was how the 1st EdCrunch convinced our management and began preparing for the launch of a Russian e-learning platform.

The idea to create OpenEdu, an e-learning platform, originated from NUST MISIS during the 1st EdCrunch conference and received support from 7 leading universities. Consequently, we requested assistance from the Ministry of Education of the Russian Federation.

The key aim of the entire project: update the content of the curriculum to make it more flexible and timely. 
Executives from 8 leading universities sign a memorandum and launch the OpenEdu platform.

500courses were available
on OpenEdu in the beginning
of 2020 lockdown

All courses comply with the Federal Education Standard meaning that each course can be incorporated into the curriculum of any university in Russia. Students can take an online course and then transfer credits for it to the university. For instance, in order to transfer from a technological university to a teacher training university, a student is required to have a credit for Psychology. So, they can do a Psychology course on the OpenEdu platform and receive the missing credit.

Launching K-12 track: teachers, school principals and deputy principals from all over Russia took part in the conference along with university representatives and EdTech startups. THE 3RD EDCRUNCH
AND 3 NEW TRACKS

Pre-school education. The conference began attracting those who were engaged in early learning: representatives of private kindergartens, hobby groups, and child development centers.

Classroom design and architecture. Projects for new innovative schools in Russia were initiated — Letovo, Horoshkola and the New School. "What should a modern school look like?" the key question we managed to answer together with our prominent experts from all over the world.

Letovo school was designed by Anna Shapiro, Chief Architect from Atrium Bureau. Anna was among the speakers at EdCrunch 2016. Billionaires, statesmen and enthusiasts are building schools in Russia. These schools are equipped with media centers and video studios, classrooms have sofas and poufs. In classes students can study in a standing or even lying position.

Corporate education. Heads of corporate universities from MTS, Sberbank, Rostec and other corporations, who integrate ongoing training programs for their staff, were brought together in one place. 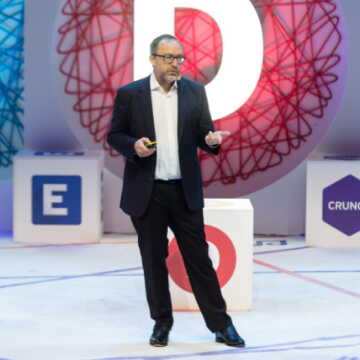 Shares his thoughts on the library and principles of the Wiki-community. 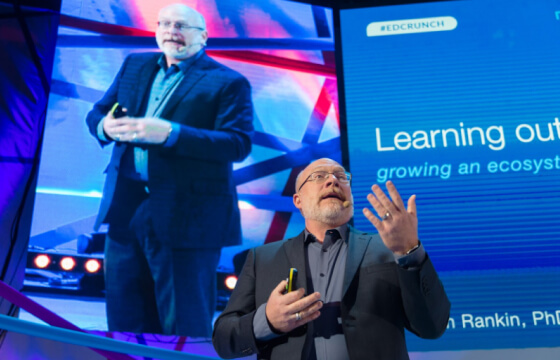 Explains why children should be taught to use gadgets for educational purposes and not only for entertainment. Devices may be harmful just like any other objects.

The first day of the Conference ended with a show at Gorkiy Park. The headliner of the show was Uma2Rman. The show was hosted by Alexander Pushnoy. 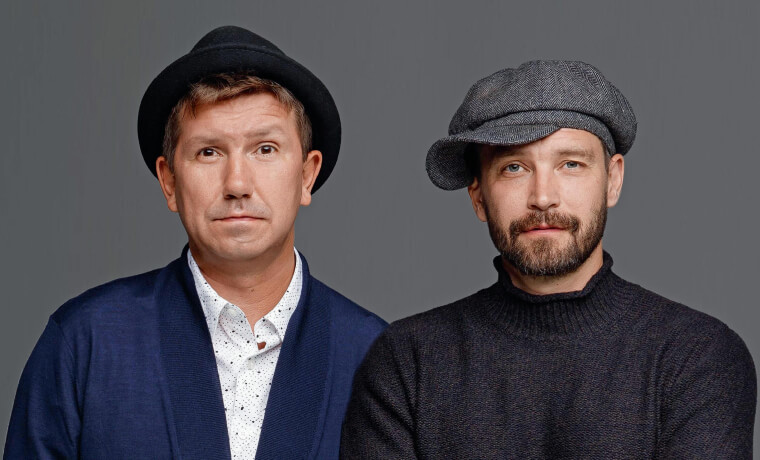 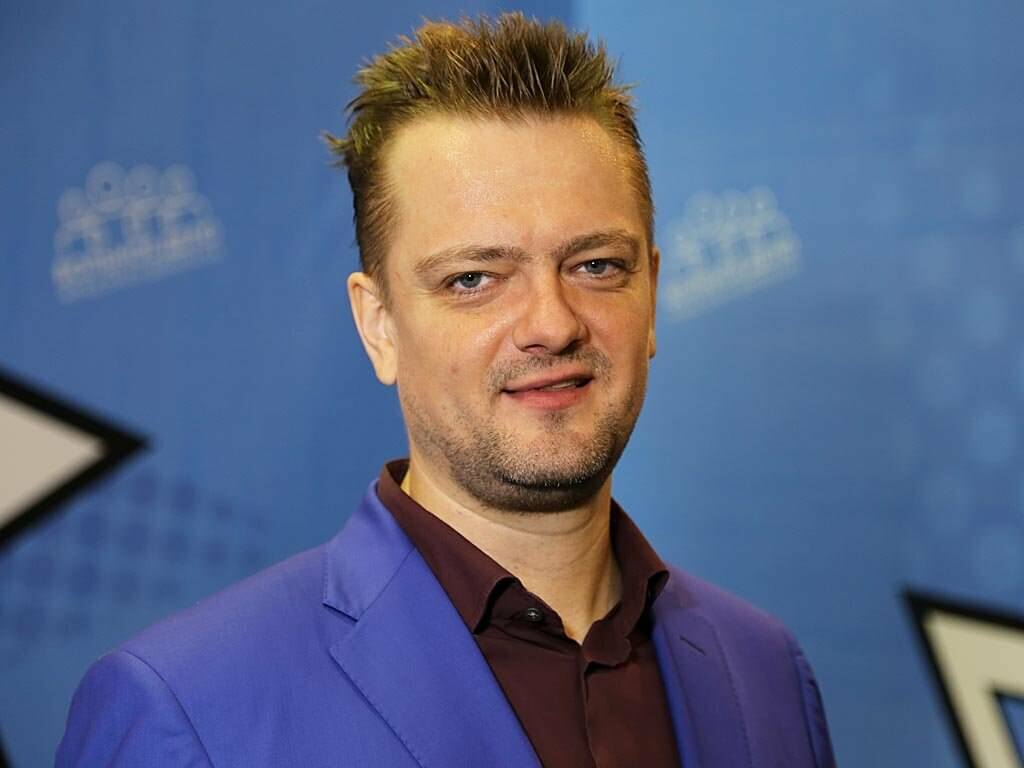 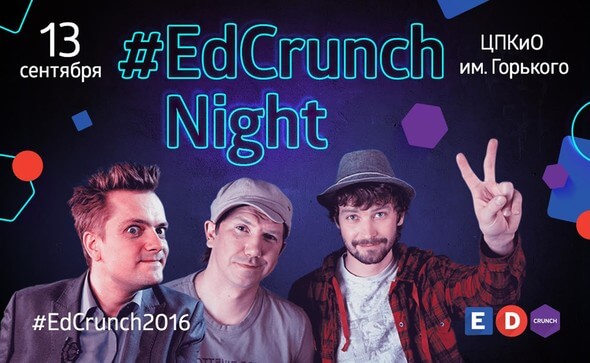 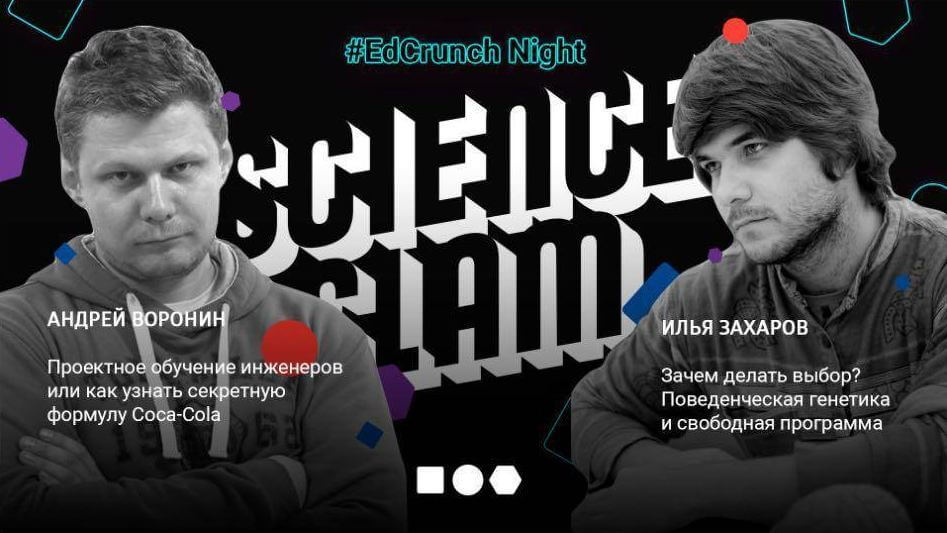 At the World Trade Center we had 11 halls operating simultaneously. Each hall had a speaker covering a variety of topics to fit any taste: from school and university to business in education. 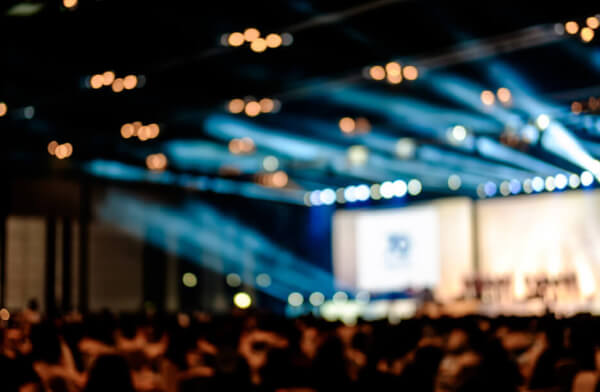 864
free tickets were given to schools and universities after relocating to a larger venue.

EdCrunch has become a link between the EdTech industry and the government. This is the spot where you can have coffee with the Minister of Education and discuss proctoring with the president of ITMO University.

At the EdCrunch Expo 2017 the attendees met with the suppliers and integrators of educational solutions, found partners and signed contracts. 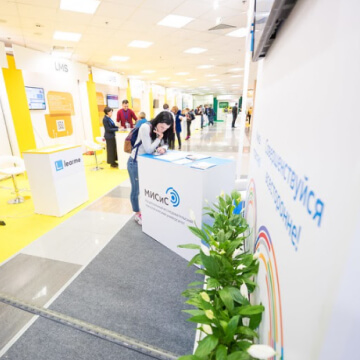 Andreas Schleicher, Director for Education at OECD, came all the way from Paris to describe a successful educational system of the future.

The project made it possible to start a “one-stop” service and move on to individual learning paths.

To save ourselves the embarrassment of the previous event, we decided to change the conference management structure. Now, the key backstage figures were those who had joined us at the dawn of the conference. Over the past 5 years, we managed to grow specialists who knew the conference inside-out and were able to undertake more sensitive parts of the project. For instance, the producer responsible for opening was now in charge of the whole entertainment program of the event. 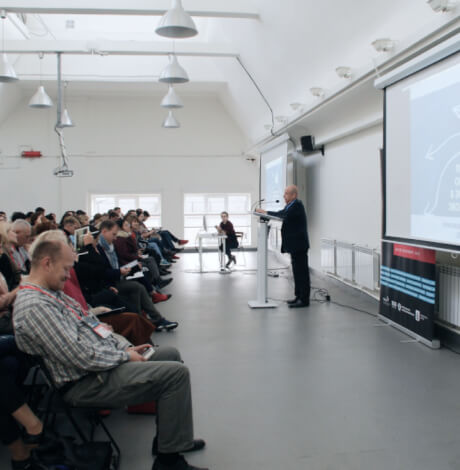 Launched EdTech as a separate track so that entrepreneurs could share experience, discuss market potential, technologies, and investment.

Launched Workshops at which different experts shared with the audience proven approaches, methods, services and helped adapting them to solve professional problems.

The attendees learnt to create educational programs based on Design thinking approach. 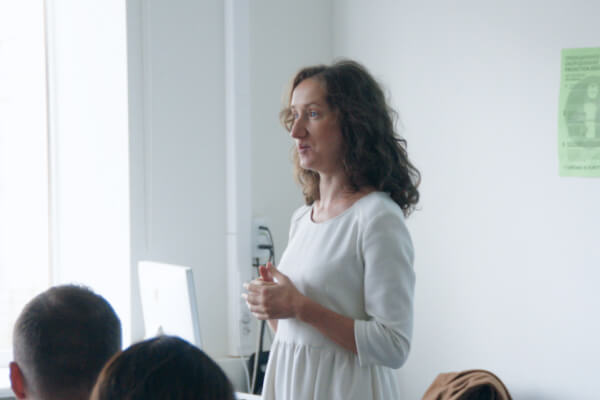 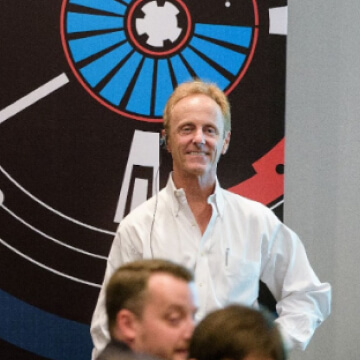 Owing to his visit, HRCrunch, a single-day program for HRDs, was launched at EdCrunch 2018. 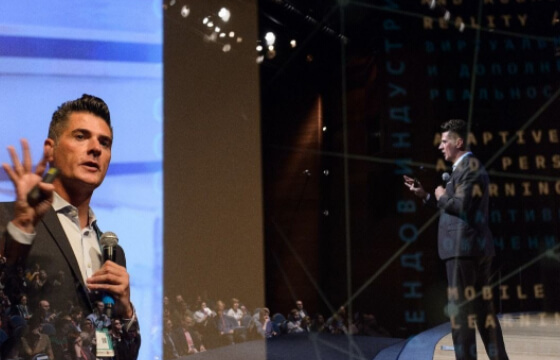 Our negotiations with him lasted for four years. We even had to travel to London to make it work out. Eventually, he came in 2018.

EdCrunch 2019 gathered all the top speakers we were unsuccessfully bombarding for many years.

At the opening session, the speakers formed three teams: "Government" , "University of the Future", and "Business" .The invited guests to bombard the teams with tricky questions and the teams tried to shoot off. 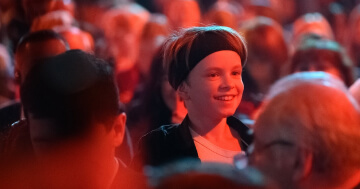 Showed a performance about education of the future. The main character was an ordinary teacher who had the same fears and concerns as his fellow colleagues emphasised how to be helpful when you can Google anything? What interests does phygital have? 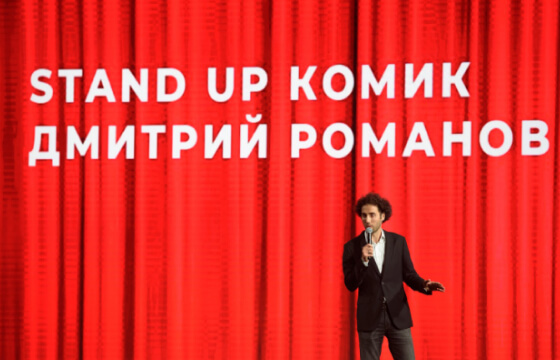 I try to educate myself with books, read a lot and self-educate. The last book I read was “Think Like a Billionaire”. Later I came across another book “Think Like a Millionaire”. I thought to myself: I don’t want to go down to millionaires level as I am already thinking like a billionaire. 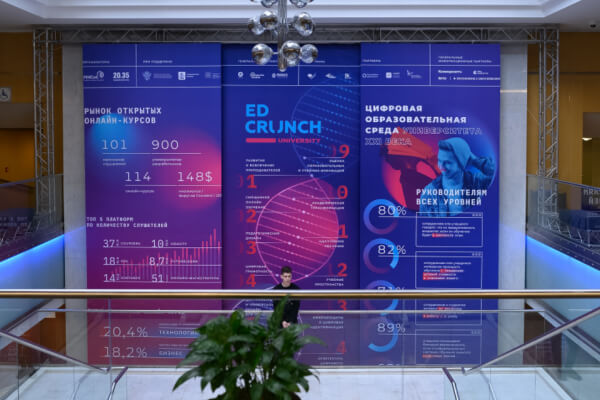 At EdCrunch we strive to make everything around education. If there is a poster, then it should have our speakers’ quotes. A company banner should include a fun fact, not just a corporate pattern with logos.

One subject. Two scientists and two opposite visions. They met for the first time on stage and found no reason to argue!

Expert advice:
“Sleep well before the exam to transfer the information from hippocamp to long-term memory. It will never happen without sleep.”

Barbara and Tatiana discussed how the brain works, and Alexander Asmolov added to the discussion. We agreed on the main thing:

Metaphor is a foundation to build
something new.


After Coronavirus moved the entire education system to distance learning, we decided to hold the conference online — EdCrunch on Demand was our largest project in seven years. 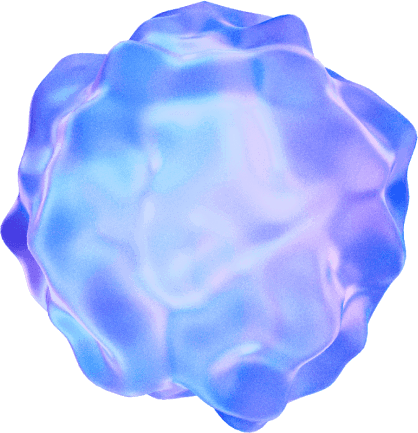 Hi, I'm Ignat
your personal assistant
at EdCrunch on Demand

In September, it became clear that the online format had its own specifics and installing a camera that streams live performances would not save us.

"To keep the attendees engaged we had to set up our own Netflix with supporting infrastructure, entertaining shows, and elements of gamification".

Nurlan Kiyasov, founder and program director of the conference

Eventually, we turned the halls into full-fledged studios, thought out various plans for speakers and interactive activities for a dynamic stream, hired a film crew of 100 people and developed the online platform EdCrunch on Demand with LMS and social networking functions.

Not only can the platform match sessions to user interests, it allows you to create your own routes of participation in sessions and communicate with other users in private and public chats. Special mention should be made of the opportunity to review the recordings of favorited speeches for a year after the conference. Keynote Speakers of EdCrunch on Demand

Gamification on the platform

Minerva Schools Innovation University student Viktor Perminov won an MBA course at Moscow School of Management Skolkovo for being the most active on EdCrunch on Demand online platform.

According to Victor, he signed up on EdCrunch on Demand because he wanted to learn about innovative educational projects, and find like-minded people to work together, and transform world education in the University of Students project, but then he got involved in the game mechanics.

"Honestly, winning at all costs was not my goal. In the very beginning, all I did was meet new people and actively participate. So, when the first achievements arrived, I thought, while I am at it, why not try going for the prizes.

But, the main award was a complete surprise to me! Frankly speaking though, it was incredibly satisfying to hear them say I was the winner".

The online platform in numbers 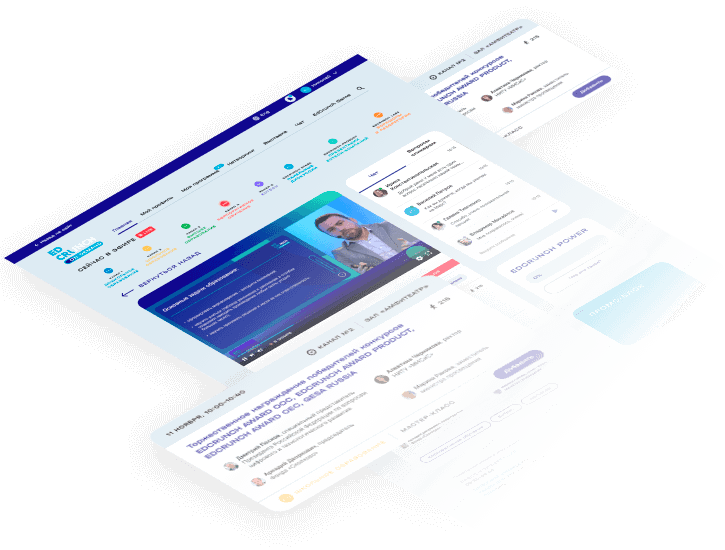 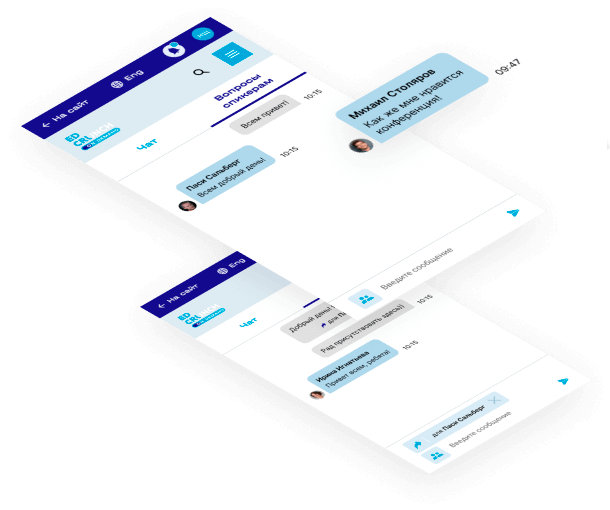 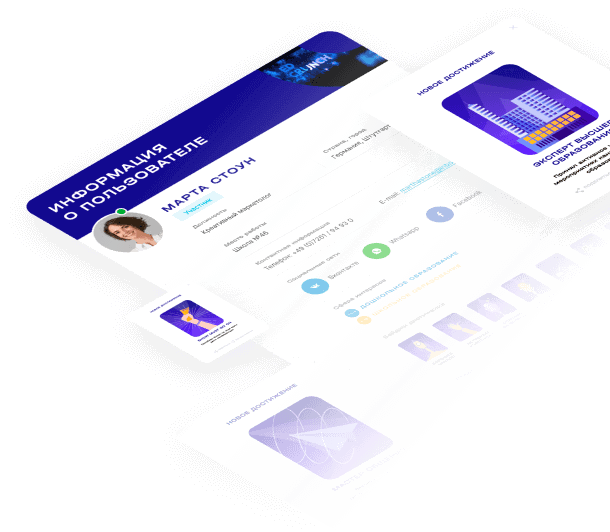 But the most valuable thing is that we all managed to be on the same page together to feel the overall vibe and support even at a distance!

It worked owing to breaking serious discussions with meditations, dance warm-ups in the morning, sparkling shows, and impressions shared at nights.

Participants sharing on social networks about the conference

In 2021 , the conference will take place in December in a blended format and in two countries — join us online or in person to get loaded with new knowledge and experiment together!

Subscribe Become a partner
Conference
Menu
Language :
Become
a partner
Thank you for your interest!

We will study your request shortly and get back to you via the specified e-mail.

Back to the Main page
Sing up
for alerts